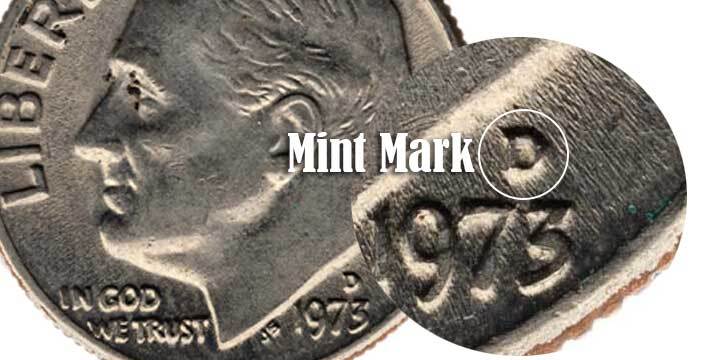 Coins With No Mint Marks

A mint mark is a very tiny letter on a coin that identifies where the coin was struck or made, but what if you find coins with no mint marks?

Since the passage of the Congressional Act of March 3, 1835, there have been eight different U.S. Mints that have issued coins. Only four minting locations still remain open: Denver (D), Philadelphia (P), San Francisco (S), and West Point (W).

Locations that no longer mint coins but whose mints may still be found include Carson City (CC), Charlotte (C), Dahlonega (D), and New Orleans (O).

What Are Coins With No Mint Marks?

Not all coins have mint marks. For many years, Philadelphia minted millions of coins without their (P) mint mark simply because they were the only Mint in production, and there was no need to verify the location where the coin was struck.

When the Charlotte, Dahlonega, and New Orleans Mint branches opened in 1838, mint marks began to appear on U.S. coins.

Coins struck in Philadelphia, however, would continue to be void of a mint mark up until 1942. These Philadelphia mint marks remained up until World War II ended, and they did not appear again until the introduction of the Susan B. Anthony Dollar Coin in 1979. To this day, a Philadelphia P mint mark appears on all coins struck there except pennies.

Are Coins With No Mint Marks Valuable Today?

Pennies struck in 1922 in Denver should be mint marked with a D. However, a small percentage of these pennies do not have the mark, due to poor quality control at the Denver mint. These 1922 plain penny errors (or plain cents) have been valued from $40 in well-worn condition with the “weak reverse” up to at $12,000 or more in uncirculated condition.

The 1971 Jefferson Proof Nickel was only minted in San Francisco. It is estimated that less than 1,000 of these nickels have no mint mark and, in good condition, can be worth around $800.

Minted in San Francisco, the No-S Roosevelt Proof Dime is so rare that only two are known to exist today. The first was discovered in 1977 and the second in 1984. One of those two traded for $456,000 at auction in 2019. It is important to note that the 1975 dimes made for circulation are worth only their 10-cent face value. The valuable version only came in proof sets and is quite different in appearance.

Have Your Coins With No Mint Marks Evaluated

Because some coins without mint marks hold value and some do not, it is best to let an experienced coin appraiser take a look at your collection. A professional numismatist like Dave Wnuck will be able to assess your coins and help you determine the value of what you have. Contact Dave today to get started!