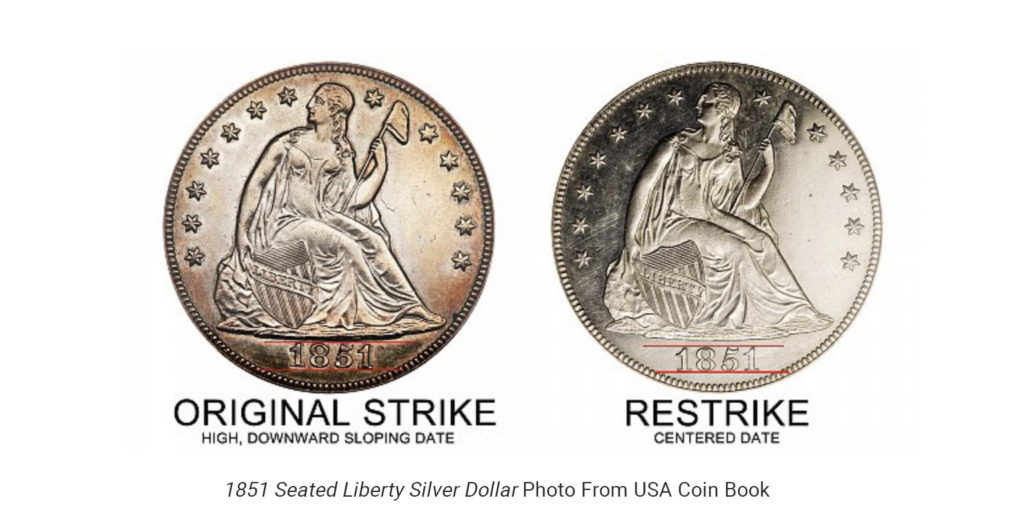 What Does Restrike Mean With Coins?

The process of creating coins, known as minting, has been performed for thousands of years; first documented around 700 B.C. Over the years, coin minting techniques and technologies have evolved into the current procedures utilized today. What first began with a hammer and anvil is now manufactured by high speed electromechanical and hydraulic coining presses. To understand what “restrike” means with coins, you first need a little bit of background on how a coin is made.

First, an artist creates a design, then a mold is made with the artist’s image. Next, a master die, plus copies of the die, are made, which will be used for the actual striking process. Blank coins are then made, checked, cleaned, and ready to enter the striking phase. Striking refers to the pressing of an image onto a blank coin. The amount of pressure used in striking depends on the type of material used and the size of the finished coin.

So, what does a restrike mean with coins?

Restrikes are often misunderstood in the world of coin collecting and numismatics. While the term “restrike” is used to describe a variety of other copies, recreations, reproductions, and later issues of a coin, it, in the strictest sense, refers to a coin that is made from an original die at a later year.

Why would a restrike of a coin occur?

There are many reasons why restrikes are created. Some of the reasons include:

Many coins referred to as restrikes hold little to no numismatic value, if not manufactured by the mint itself. Its condition, rarity, and historical content would make an actual restruck coin valuable. In the US, there were several instances in the 1800’s when a coin was restruck using mint equipment without authorization. These people are sometimes referred to as “midnight minters” by historians.

While technically they were illegally made, they are avidly collected today by some collectors. In the meantime, the US mints have greatly tightened up their procedures and oversight such that this hasn’t happened for well over 100 years since.

If a coin is simply a copy, then there is no historical content or value to the coin. In fact, the Hobby Protection Act of 1973 requires that copies or replicas of coins have the words “copy” or “replica” stamped on the coin. If a coin is a true restrike, then there may be historic and monetary value to the coin. To determine if a coin that you have is a true restrike and to understand the actual value of your coin and coin collection, you should seek out an experienced numismatist, like Dave Wnuck, for an appraisal.